Celebrities Who Have Spoken Out About Mental Health

It’s World Mental Health Day Glossies, a global day that raises awareness around mental health. So, to help fight the stigma surrounding mental health and remind those of you who might be struggling that you’re not alone, here are all the inspiring celebrities who have spoken out about their own struggles.

If you haven’t watched Jesy Nelson’s BBC Three documentary ‘Jesy Nelson: Odd One Out‘ yet, then you really need to! She speaks out about the online abuse she received after entering the X Factor in 2011. This led to an extreme depression and caused her to try to take her own life.

Now though, she’s learnt to be mentally stronger and happier. She’s using her online presence to raise awareness about the dangers of social media, not wanting anyone else to be subjected to the type of trolling she had to deal with.

Speaking about the documentary, she said:

As much as it was a horrible experience for me, I want to make something good come out of it. I’ve got this huge platform – why would I not use that to raise awareness of how social media is affecting people?

Ariana Grande On The Power Of Therapy

In 2018, following a year of challenges and public scrutiny, Ariana Grande took to Twitter to speak out about how much therapy had helped her. She encouraged her fans to ask for help when in need and reminded them that things can get better.

She wrote: ‘Therapy has saved my life so many times. If you’re afraid to ask for help, don’t be. You don’t have to be in constant pain and you can process trauma’. 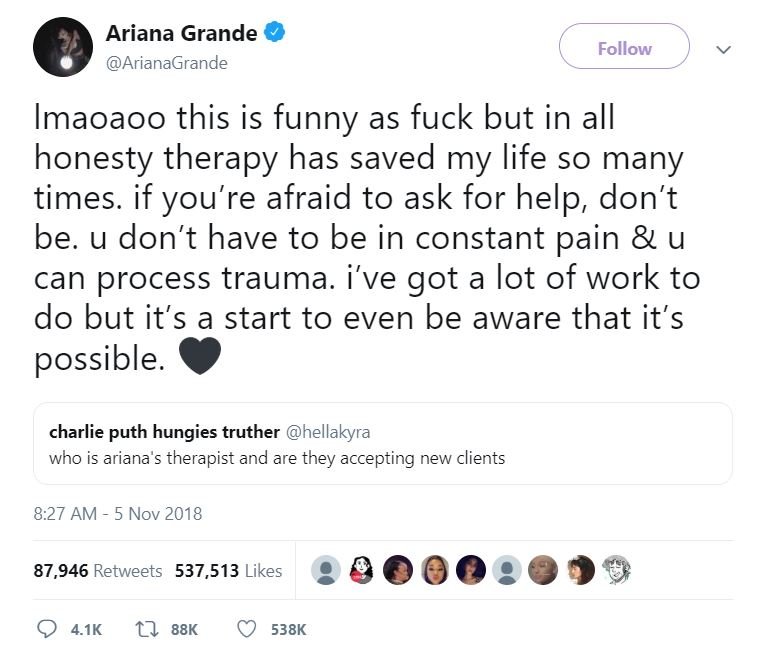 Two years earlier, it was The Good Place actress Kristen Bell who penned an article for Time Magazine where she debunked the stereotype that mental illness makes you weak.

There’s nothing weak about struggling with mental illness. You’re just having a harder time living in your brain than other people. And I don’t want you to feel alone.

She goes on to emphasize the importance of ‘mental health check-ins’, explaining that talking to her doctor about her struggles has helped her to work through her depression and anxiety. She encourages everyone to do the same. ‘Depression is a problem that actually has so many solutions. Let’s work together to find those solutions for each other and cast some light on a dark situation.’

In an interview with Allure, Amanda Seyfried opened up about her OCD. She explains that she’s been taking Lexapro, an antidepressant pill, since she was 19.

I’m on Lexapro, and I’ll never get off of it. […] Mental illness is a thing that people cast in a different category, but I don’t think it is. It should be taken as seriously as anything else.

She goes on to explain that there’s no point risking coming off the medication. She stresses that there’s no shame in using ‘a tool’ to get better. She says ‘if you can treat it, you treat it’.

The Royals Speak Out About Mental Health Too

As proof that mental health really does affect everyone, even Prince Harry sought professional help after struggling with his mental health too.

In 2017, he told The Telegraph that ‘he sought counseling after enduring two years of total chaos while still struggling in his late twenties to come to terms with the death of his mother’.

Four years after seeking help, he spoke out about his experience to encourage people to break the stigma surrounding mental health issues. He also founded the Heads Together campaign, with the help of Prince William And Kate Middleton, to offer support to those struggling with mental illness.

In fact, they’ve since launched a 24-hour health texting messaging service called Shout. It links users with a volunteer team who is there to talk them through a situation and help them find long-term support.

World Mental Health Day is such an important campaign that encourages everyone to speak up about their struggles with mental health. This year, the World Health Organisation’s campaign is focusing on suicide prevention.

Raising Awareness Of Suicide And How To Prevent It

This might be hard to hear Glossies, but, according to the WHO, a person commits suicide every 40 seconds. In the UK alone, 6,507 people took their own lives last year.

Here at GLOSSYBOX, we believe that people should support and empower each other, whether that’s being a non-judgemental ear or a shoulder to cry on. You can read our top tips on practicing mindfulness here, or visit the WHO website to support their campaign and find out more about suicide prevention here.

An avid sportswoman, I'm always on the prowl for the latest trending hair and skincare products that will keep my curls bouncy and my skin glowing despite intense exercise. I believe that when you look good, you feel good and it gives you the confidence to always perform at your best.

The Best Tinted Lip Balms Under £7!

Tips For The Best Beauty Sleep Ever

What Are Essential Oils And How Do They Work?

How To Detox Your Skin (+ Our 7 Fave Products To Help You Do So!)